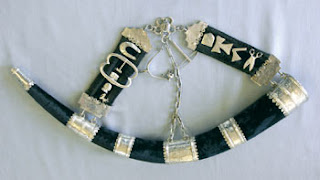 The Ripon Charter or Wakeman's Horn, comprising a covered cattle horn and suspension straps, plus a separate baldric, was recently the subject of detailed investigation and recording for the first time in its long existence.
The horn itself, now dressed in dark blue velvet with silver mounts, is said to have been presented to the city by King Alfred the Great, and is Ripon's most important piece of civic regalia; it is certainly of considerable local and national interest and importance.
With financial assistance from HLF, Ripon City Council commissioned York Archaeological Trust to bring together a team of conservators and expert researchers to make a full record of every aspect of the horn and its fittings. The Council was aware that without this, any accident or loss could deprive not only Ripon but the nation of this remarkable object and the history that it contains.
The tradition that the Horn was given to Ripon by King Alfred stems from the History of the Loyal Town of Rippon, written and published by Thomas Gent in the early 18th century. Although Gent claimed that the information he presented had been 'faithfully and painfully collected', his work was later described as being 'somewhat fragmentary and erratic'. Gent claimed to have seen 'an antient manuscript' in which it was stated that Ripon had been incorporated as a borough in the 14th year of the reign of King Alfred, i.e. in 886. On this basis he claimed that the office of wakeman, forerunner of the present mayor, and recorded in Ripon from 1400, had been instituted at that time; and therefore it became accepted that the Wakeman's Horn, the badge of office, also dated from 886.
The rather shaky basis for these assertions is obvious. No-one other than Gent has ever claimed to have seen the manuscript to which he refers; other, more trustworthy local historians, including John Richard Walbran, the noted Victorian Riponian who wrote extensively and informatively about Ripon and its vicinity, either ignore or reject Gent's claim. Even if Gent did see 'an antient manuscript', there is no reason to believe that it was a genuine, contemporary, ninth or tenth century factual record of events; it may have been of any, pre-eighteenth-century date, and be a fanciful collection of tall stories. For this reason alone, examination of the Horn itself provides the best means of establishing its pedigree.
The Horn's silver suspension mounts and craft guild badges, and also the baldric, covered in many silver mayoral and Wakemen's badges going back several centuries, have all been carefully recorded and studied. The various layers of velvet and other textiles were also examined, some probably dating back to 1703 when the first detailed redressing of the horn is recorded. X-ray plates, made at the Tower Armouries, Leeds, of the various elements of the horn, now form a unique visual record of the horn and accoutrements.
A major element of the work was to 'undress' the horn itself, a very exciting and rather tricky business. Once exposed, it was found to be a steer's horn from a type of longhorn cattle not thought to have been bred in Britain before the post-medieval period. Remarkably, though, the horn had been thinned down in antiquity, leaving a curious 'keel' raised proud on the underside. The surfaces were covered in the 'chatter marks' from the tool used to pare the horn down, and there were heavy signs of wear and polishing in the area that the horn would have been held when being blown. As anticipated, the narrow end of the horn was shaped into a mouthpiece, demonstrating that this had indeed originally been intended as a functioning blast horn before it assumed a wholly ceremonial (and unplayable) use. Of particular interest were the many redundant fixing holes from previous mounts and adornments, demonstrating that the horn must be of considerable antiquity. An initial report detailing the work undertaken so far is now being prepared.
(York Archaeological Trust - News)
Posted by Hungarian Medievalists at 11:44